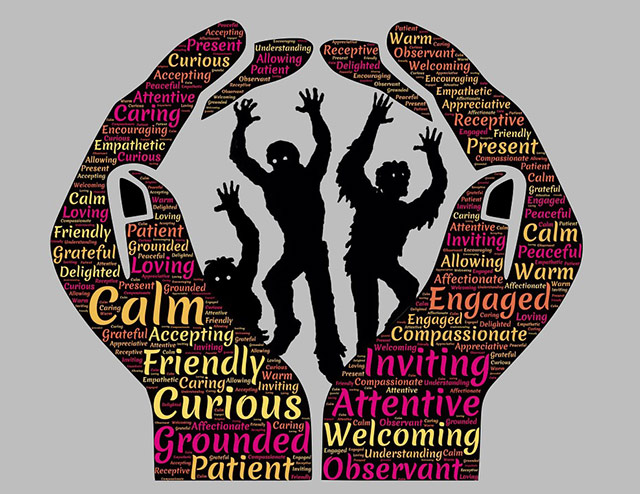 Embracing All Our Selves

We met one another in the early seventies and, from the very beginning, our personal lives and our professional lives have been inextricably intertwined. Hal had been a Jungian analyst, committed to the individuation process. He had enjoyed teaching and consulting from his earliest years. Sidra had been trained in a more eclectic fashion with an emphasis upon some of the more practical aspects of psychology such as community mental health. She particularly enjoyed her years as executive director of a residential treatment center for adolescent girls. When we came together, we began a period of exploration and innovation that has continued ever since.
Our relationship has been a teacher for both of us from our first contacts with one another. We decided at the outset that we wanted to open ourselves completely to the relationship, to let it lead us where it would. We tried to be as honest as we could and to explore what was really happening both intrapsychically and interpersonally rather than what we wished were happening. This commitment has led to some very exciting discoveries as well as to some rather “dicey” moments. The basic ideas in the following article are the outgrowth of this joint personal exploration.
Since Voice Dialogue and its accompanying theoretical framework have evolved out of our relationship and out of love and acceptance, it is a work that is basically non-judgmental and non-pathological in its approach to the human psyche. It seeks to discover what is rather than what is wrong. It is committed to the belief that there is no correct way of conducting one’s life, there is just the process of life, itself.
In our own clinical work, we have both continued to use a wide range of therapeutic and teaching modalities in addition to Voice Dialogue. We never saw Voice Dialogue as a therapeutic system that must stand alone or conflict with any other. It seemed to us that a practitioner of any form of therapy, healing or consciousness work could use Voice Dialogue in his or her system. Furthermore, it became clear that non-therapists could learn the dialogue process as well. Couples could be trained in the work and it would serve to enhance their relationship. One of our aims has been to establish as clearly as we could the lines between Voice Dialogue training and psychotherapy.
In our travels around the world, and as this work has become better known, we have taken a very strong position on these issues. We have taken the position that Voice Dialogue is not a therapeutic system in and of itself but belongs to all systems as an effective tool for enhancing consciousness and objectifying the many selves that inhabit the psyche. When an individual needs therapy, he or she must see a therapist and should not get locked into Voice Dialogue as a substitute for therapy. There is no substitute for good psychotherapy when this is required. In the hands of a competent psychotherapist, however, Voice Dialogue becomes a particularly effective and powerful tool.
Despite a good deal of encouragement from many of those whom we have trained in our methods, we have consistently refused to institute any kind of formal certification training in regard to Voice Dialogue. We see the facilitator as a creative musician, if you will, and Voice Dialogue as the instrument that is to be used. It is clear to us that any kind of certification process would effectively kill the spirit of this work. In this way, we have found that the Voice Dialogue process has been used quite imaginatively and innovatively not only by psychotherapists of widely differing backgrounds, but in areas as far afield as business consultation, astrological analyses and sculpting. We like to think of this work as belonging to everyone, as our gift to the seekers of the world.
Hal Stone, Ph.D. Sidra Stone, Ph.D April, 1997

The consciousness process as it relates to the complexity of the human psyche and its many disparate facets has always been a source of fascination to us. During the early seventies we were struck by the realization that our psyches contained many individual selves, each with its own way of perceiving the world, each with its own personal history, physical characteristics, emotional and physical reactions, and opinions on how we should run our lives. Since then, we have spent much of our time, both professional and personal, in studying these selves.
Because of this interest, we have been delighted to note that one of the areas of psychotherapy receiving increasing attention today is the phenomenon of multiple personalities. Not only are multiple personalities being studied in terms of their theoretical implications and the appropriate therapeutic interventions, but there is also a growing literature of brain research that seems to demonstrate the existence of physiological correlates of these psychological entities in all of us.
Up until now, the multiple personality has been seen only in terms of its pathological implications. What we have discovered in the course of our personal and professional life is that we are all made up of multiple personalities — all of us with no exceptions! The essential difference between ourselves and an individual clinically diagnosed as being a multiple personality is that we have an operating ego of some sort that can observe and reflect on the fact that we are not a single psychological entity, but rather, as Walt Whitman would say, we contain multitudes. That is the only difference. We are, each of us, inhabited by an inner family of selves no less real than the outer family of individuals into which we were born.

The Emergence of Voice Dialogue

Theoretical considerations – the birth of personality

The key issue in thinking about the development of personality is the understanding of vulnerability and the pivotal role that it plays. We are all born totally vulnerable and in our early months and years of life, we must be taken care of by other people. Our very lives depend upon this. We must begin to develop a personality that will protect this vulnerability. This vulnerability remains as the Vulnerable Child that operates deep within each of us for the remainder of our lives.
The cornerstone of this personality, the core of our Operating Ego, and the first selves to develop, are a group of primary selves that serve to protect this child from pain and to control our behavior in such a way that we can avoid pain and begin to reach our goals. This Protector/Controller group of primary selves emerges very early in our lives. It looks about, notices what behavior is rewarded and what is punished, it figures out the rules of the world around us so that this world is predictable and makes sense, and it sets up an appropriate code of behavior for our specific environment. These primary selves are constantly on the lookout for more information and, when they are functioning appropriately, they will change the rules to accommodate any new input. These primary selves explain our world and ourselves to us and provide us with the basic frame of reference within which we will view our surroundings. It helps to keep life coherent, and it is basically rational in nature. Let us see what this might look like for the developing child.
Alicia is lying in her crib. She is six months old. Her mother and father are standing over her; they are gurgling and cooing and she is gurgling and cooing right back. Sometimes, however, she does not feel like gurgling and cooing. Her Protector/Controller system of selves notices a change in them when she stops being happy. Her primary self system begins to come into operation at this time and it lets her know that she needs to gurgle and coo, that they like this and expect this. Her feelings are less important in the long run than their feelings and they clearly expect something of her. So the gurgling and cooing becomes a kind of overriding behavior, built on top of her natural inclinations to gurgle and coo. This voice that starts to talk to her and guide her is the beginning of what we refer to as the “Operating Ego.” When most people refer to the ego, they are actually talking about the operating ego. By definition, the operating ego is the group of selves that define our personality, how we operate in the world and how the world perceives us. Our initial primary self is already supporting the development of another sub-personality here, and that is the Pleaser Self. This Pleaser usually gets started quite early for most of us generally becomes a significant part of the primary self system.
Johnny is two years old. His father is a very physical man and he is swinging Johnny around the room holding him by his arms. Johnny is not a physical child and this behavior frightens him. His Protector system says to him — ” Now look – this man likes swinging kids around – maybe he thinks he’s Tarzan – whatever the case, you’ll do better to enjoy it, to go along with it. He’ll be happier. If he’s happy, then you’re safe. You can’t be hurt. If you’re unhappy there will be ridicule and criticism. Who needs it?” The Protector/Controller helps Johnny to develop a Brave Young Man self. Needless to say, we are being a bit humorous in our presentation, and we hope it is obvious that the Protector/Controller self system of a two year old would not speak in exactly this way. What we wish to convey is the general sense of how this Protector/Controller and the dominant selves of the Operating Ego evolve within each of us.
As time moves on, other parts of the personality develop, each contributing its own flavor to the Operating Ego. A Pusher may develop to make sure we get done what has to be done, and more besides. If it pushes us hard enough, then we will be so successful that no one can criticize us or attack us. A Money Self may develop because if we have money we are safer and less dependent upon others. A Pleaser develops, as we have seen, that makes sure we are nice to people and please them. Our basic protective system assumes that if we are nice to people, they must be nice to us and this is a way of keeping ourselves safe in the world.
Along with a Pleaser might be a Loving Self. After all, if we are loving then we are loved in return and the child is happy. Each of these Selves develops in relationship to, and under the aegis of, the original voices that emerge to protect and control and guide our behavior. These original selves create the rules that determine how we live or lives for a long time into the future, sometimes forever.
In other instances, at a later time in life, a competing primary self may emerge, a rebel, who declares war against all rules both outside and inside. In this case we have two primary selves inside constantly at war with each other.
Together this combination of selves comprise what is known as the Primary Self system or the Operating Ego. It is this Primary Self system that provides us with the basic conception of who we are in the world, and, generally speaking, it also determines how we are perceived by others.